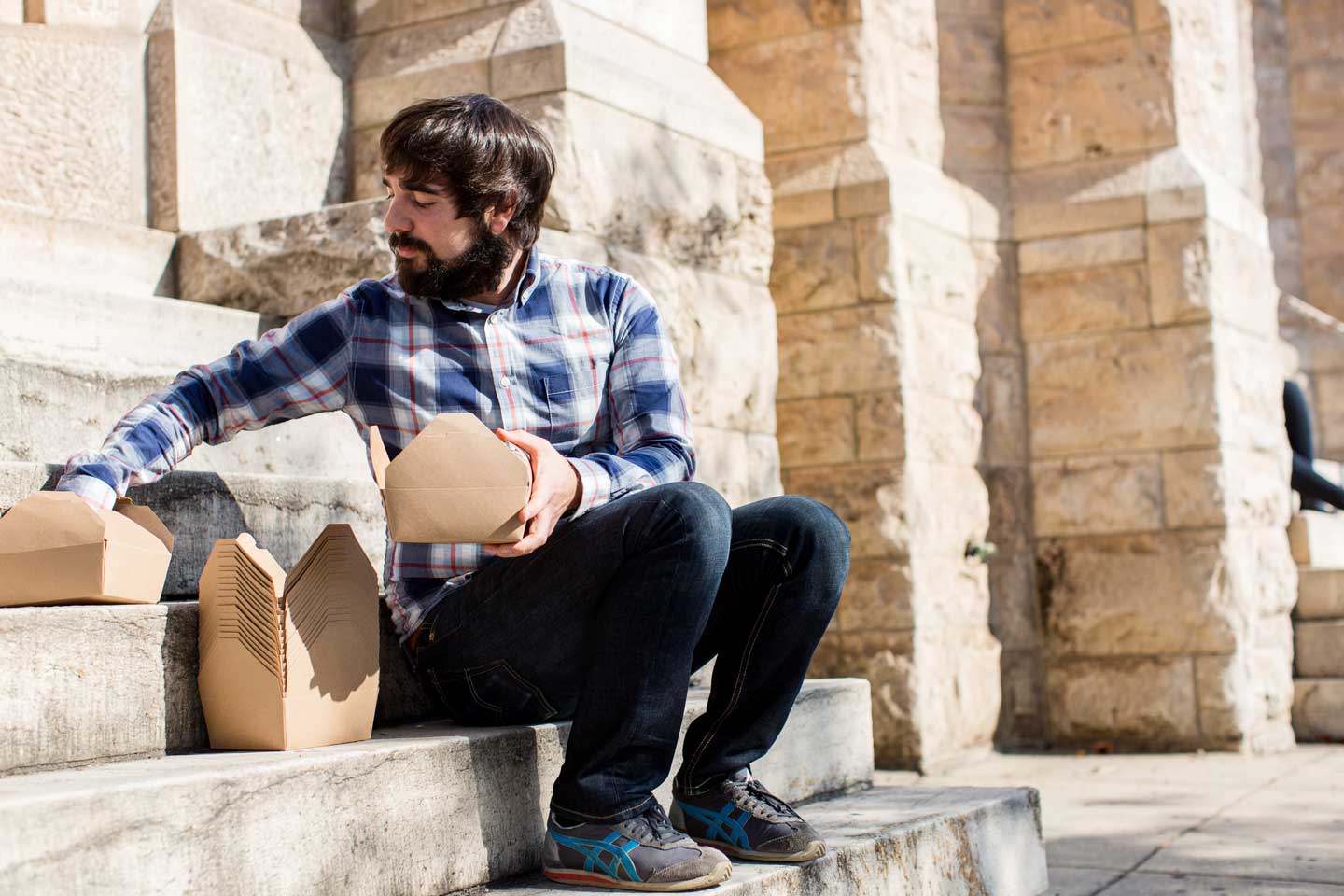 Innovation: Creating an app to deliver surplus food to people in need

Hobbies: mountain biking, visiting local breweries, volunteering at his church, hanging out with his wife and two children

Fun Fact: Loved living in Germany for a few years but loves living in Baltimore even more.

A cybersecurity whiz wants to put his IT skills to good use – as in doing good.

Who would’ve thought that watching comedian John Oliver would get somebody so riled up?

Yet that’s what happened when IT professional Steve Nutt saw Oliver’s report on food waste in this country. According to the stats, we waste 500 billion dollars’ worth of food in the U.S. every year.

“I was irate after watching that segment,” Nutt recalls. “I thought, maybe I should do something.”

But what? Nutt’s background is in computers (by way of microbiology, political science, and international relations at West Virginia University in Morgantown). He didn’t know anything about delivering surplus food from restaurants and caterers to people in need.

He did, however, know about crowdsourcing, which he defines as “using everyday citizens to achieve a common goal.” He also knew about taking in huge swaths of data and making sense of it. About harnessing the power of technology. So he signed up for a one-day intensive workshop with the Social Innovation Lab sponsored by Johns Hopkins Technology Ventures, to work with other like-minded people. He also participated in the annual Baltimore Hackathon, whose motto is, “Meet People. Build Stuff. Have fun.” It was there that Nutt came upon an organization called Unsung. It seemed to be doing what he wanted to do. He called the owner and began discussing collaborating.

“How do we tell the whole food story?” Nutt asks.

It’s great to support a restaurant that serves all locally sourced food, but that’s only half the story. That’s about how the food gets there. Where does it go after that? How do we complete the circle? Wouldn’t it be great if a menu had, say, a notice that food wasn’t thrown away but instead went to people in need?

There are, Nutt acknowledges, still some kinks to be worked out. Security, for one – “We want people to be safe while they’re doing this”; geomapping, for another – how to identify locations and track how much and what kind of food is going to each one. “If somebody gives us 300 apples,” he says, “we don’t want to just dump all those apples on people in one place. That’s not a complete meal.”

Nutt has coined a term – “hangry” – which is “hungry” plus “angry.” That’s what motivates him, he says, the knowledge that too many people out there are hungry and that the food available to satisfy that hunger is going to waste. If he has anything to say about it, “hangry” someday will be a thing of the past.