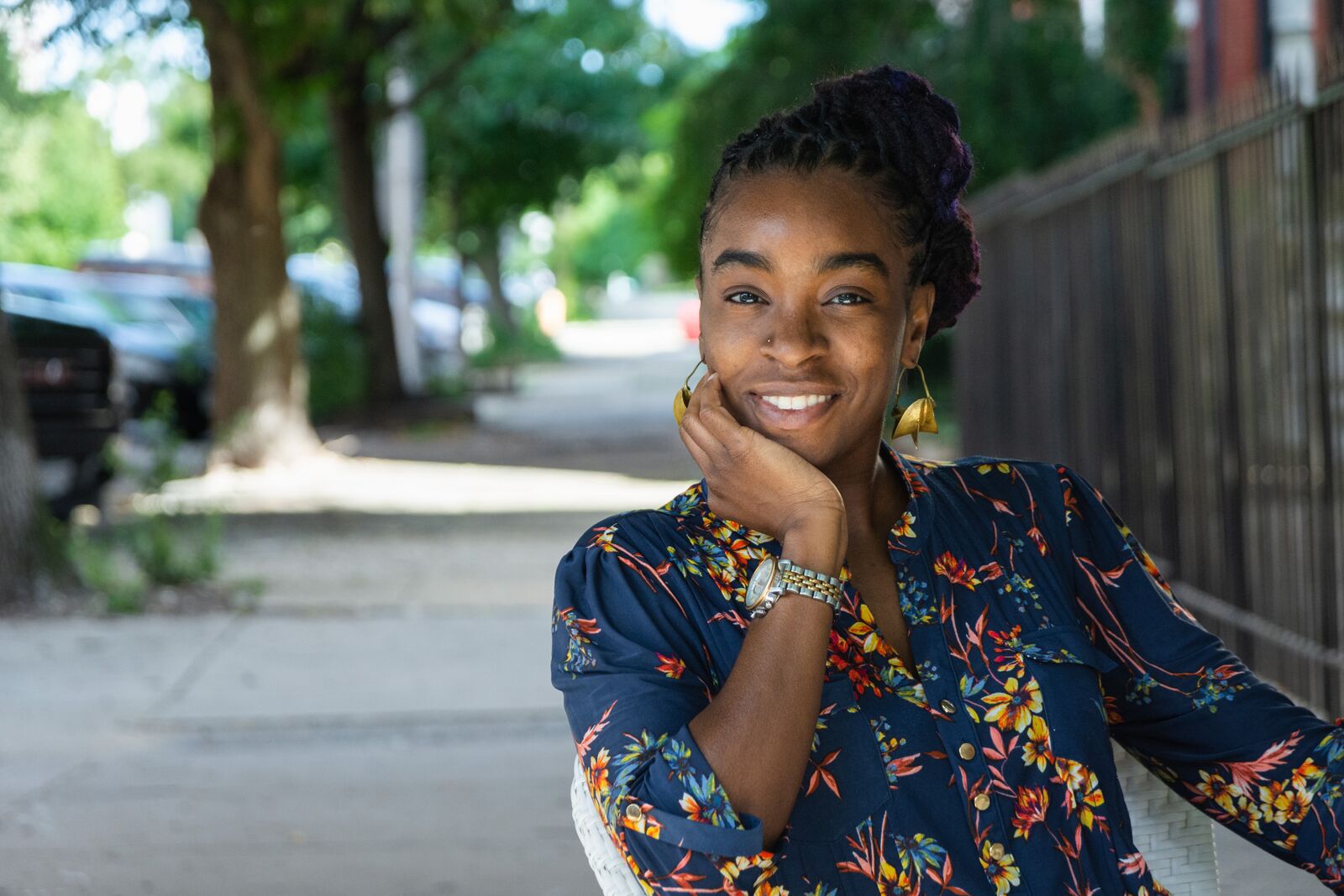 When Jewel Guy met her husband, they were both in what she calls “situationships”—you know, those not-going-anywhere relationships where you just can’t seem to “quit” the other person. But the former electrical engineer couldn’t deny the spark she felt when she first saw NAME on stage, performing spoken word at a Baltimore nightclub.

“I was captivated, but I still made him chase me for an entire year before I’d go out with him,” she says with a laugh.

That patience paid off. Just three weeks after their first date, the couple was sitting in NAME’s living room eating take-out, when he casually dropped this bombshell: “I think we could do the whole ‘til-death-do-we-part thing.” (Jade, who had been engaged twice before, was surprised to find she agreed.)

A few months later, the couple was jetting off to Miami Beach to get married in a private ceremony straight out of a Hollywood movie.

“The problem with movies is they always seem to end with the wedding,” says Jewel, now a full-time photographer and owner of Captured Treasure Imaging. “The audience is just supposed to assume the couple goes off and lives this fairytale life. But the truth is, marriage is hard work—and it starts the day after the wedding.”

That’s what inspired Jewel’s new photo documentary series, “Show Your Black Love,” which she’ll be releasing as a coffee table book this summer. The project features portraits and interviews with 50 African American couples, from newly engaged and same-sex couples to those who’ve been married for 20, 35, even 73 years.

“We live in such a technology driven, instant gratification society. I think it helps to slow down and get to know the people who came before us,” she says.

“Show Your Black Love” is one part revolution and one part resource manual. In addition to showcasing the beauty and diversity of Black love relationships, which is rarely reflected in mainstream media, Jewel wanted to provide real advice for real couples—not in a self-help-book kind of way, but through “candid and transparent narratives” of people who could easily be the readers’ relatives, neighbors, or themselves.

The conversational format of the interviews was inspired by Jewel and NAME’s habit of talking to strangers: on airplanes, at restaurants, in line at the bank, pretty much everywhere.

“We ask if they’re married or in a committed relationship. For how long? What do they love most about their partner? How have they sustained their relationship to the present day? We want all the secrets!” (Sidebar: They’re both aspiring life coaches.)

In the book, couples talk openly about their challenges and triumphs—not shying away from topics that have traditionally been considered taboo in the Black community, such as mental health.

Take Frank and CHENELLE(?), who were on the brink of divorce, but ended up going to therapy and it saved their marriage. Their advice for couples: learn to fight fair.

“Their story always stands out to me,” says Jewel, who now considers communication one of her strong suits. It’s a skill she’s developed in partnership with her self-reflective, let’s-talk-about-everything husband.

“In the midst of an argument, it’s human nature to focus on what the other person is doing wrong—why you feel frustrated or hurt,” she says. “But sometimes you have to peel back the curtain and look at yourself. How did I contribute to this situation? How could I have said this better? Sometimes the key to staying together is being open to personal growth.”